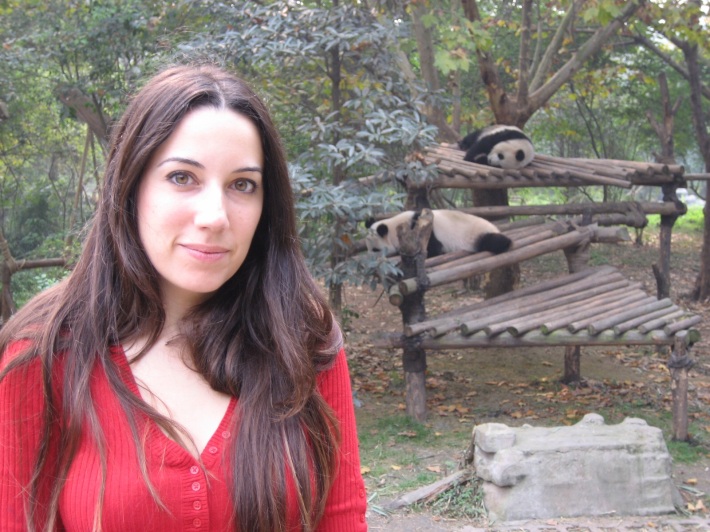 Me visiting pandas in Sichuan, China

My name is Sarelle Hayek, and I’m using this blog as a creative output for all the things I enjoy, namely, food, cooking, travel, and anything else I want to share. I’ve really enjoyed putting this blog together. If you like some of my recipes or stories, that’s just icing on the cake.

I’ve always had a distracting relationship with food and travel. I say distracting because I’m often preoccupied thinking about where to eat and where to visit, when I should be thinking about much more mundane things. I’m a dreamer. I read all the time, and the books I read take me away to someplace else. Very often, the books combine travel and food.

I’ve cooked for myself since I was 14. My taste in food has changed since then, but not my passion for trying new foods and testing out what works and doesn’t. My parents are Armenians from Lebanon and Iraq, but my great Grandparents come from Urfa, Turkey. I grew up eating Lebanese, Urfa Armenian, and other Middle-Eastern type foods. Up til the age of 9, I lived in the U.K. I went to an exclusive all girls’ Catholic school. The school was at least two-hundred years old, and had lunch in a very fancy dining hall. We were served a three-course lunch every day, starting with soup. The Food was standard English fare, lamb with peas, minced meat with pureed carrots, etc.

My mother, brother and I visiting a farm in Wales. Taken in 1980.

At the age of 9, our family moved to a then very Anglo-Saxon Orange County, California. This was 1985. I went to a public elementary school where most students brought their own brown bag lunch and had to find his or her own place to sit down out doors.  On my first day of school, I didn’t know any of this. I was fully expecting a dining hall with the familiar three courses! After that, I remember bringing lahmacun and dolma to school and the other kids staring with disgusted expressions on their faces. I was embarrassed at my differentness. I begged my mother to pack “normal” foods, bologna and cheese sandwiches, for instance. Bless her, she did. I didn’t have the faintest knowledge that one day I would be proud of my family’s food and heritage and eager to learn more about it.

When I was 14, I became a vegetarian. I did it strictly for humane reasons. I always enjoyed eating meat and still drooled over the smell of bbq! My mother didn’t feel like cooking separate meatless meals for me all the time (although she did do this regularly). This propelled me to learn to cook for myself. I loved it and was encourage when things didn’t turn out disgusting. On the contrary, everything was completely edible! Unfortunately, I wasn’t a healthy vegetarian. I ate all the wrong things. My taste buds dullened from eating an abundance of high fat/high carb foods. I didn’t know any better. I ate lots of cheesy meals, potatoes, pastas, and lots of processed foods.

One summer when I was 19, I went to Beijing, China. I spent the entire summer at the Beijing Language and Culture University studying Mandarin (Yu Yan Xue Yuan, 北京语言学院). When I returned, I decided I wanted to take Chinese language classes while in college at UCLA. I attribute my desire to learn Mandarin to my extreme curiosity about everything. China, indeed, Asia, was still very unknown to me, and the unknown was so exciting. This was in 1995, and there weren’t that many people wanting to take up Mandarin. People thought it very eccentric of me. When I graduated, I hadn’t the slightest idea about what to do next. I knew what I didn’t want to do…..return to suburban Orange County. I then thought, why not China for a while? I packed my bags and headed to Beijing with a friend. It was February of 1998. I was 22 years old with only $500 in my pocket. The plan was to look for some sort of job and hope that the $500 would be sufficient until I found one. I stayed in a very cheap student hotel at QingHua University. I would spend the day looking for job leads and sending out resumes. My Chinese was still very much at the beginner level. Taking language classes a few hours a week in college is one thing and being totally immersed in a language is another thing completely.  Looking back now, I really don’t know where I got the courage to do this. Honestly, I really don’t think I could do anything like that today. I was young, naive, and just felt I would be okay. You know what…..everything was okay. A few weeks later, I managed to find my first real job in a five-star hotel as sales manager to the embassies and Airlines. I had no sales experience, I was very young, but I was put in the position of having to meet with foreign ministers, Ambassadors and dignitaries from all over the world! I was given the job because I had a foreign face, and am American. This was still very much a novelty for China. It was truly amazing. My pay was a pittance, but I was given a room at the hotel and was permitted to eat for free of charge at any of the hotel’s restaurants. I worked at the hotel for almost two-years.

I soon realized that being a vegetarian in China was pretty impossible for me. At restaurants, plates of vegetables would be prepared with chicken stock or even pieces of pork. I decided to go back to eating meat rather than pretend to be a vegetarian. I spent about 7 years in China. Those years where the best years of my life (for many reasons, but mostly because I met the love of my life and my husband there). Those were also the best food days of my life. I ate Chinese food every day. It was truly food heaven for me. I wasn’t picky about the types of restaurants I would eat in. I ate anywhere from hole in the wall places to banquet halls. I found Chinese food to be insanely varied. I never tired of eating it. Now that I am away from China, I long for Chinese food all the time. Living back in South Orange County, I’m living in an authentic Chinese food desert. When I arrived in China, I was overweight. After a year of eating lots of regional Chinese food (not depriving myself at all), I shed all my extra weight. I looked great. Not only that, my dullened taste buds re-awaked, and I developed a much more discriminating palate. I craved foods with varied flavors and different textures, not just foods high in fats and sugars. 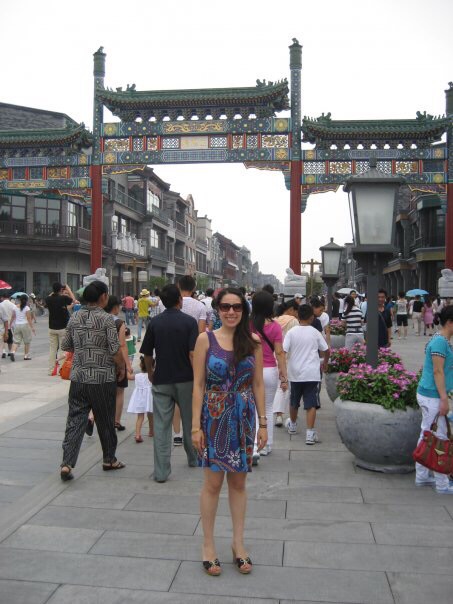 Taken in Beijing near Qianmen during the 2008 Olympics.

Former Chinese colleagues of mine in Beijing. What a lovely bunch of ladies!

In 2007, I got married and moved to the Seattle. That was a big change, but we really enjoyed the beauty, clean air, and diversity of the area. It was easy to buy organic and lead a healthy lifestyle. After China, this was just what we needed. I eventually had two amazing children, a boy and girl, both born in Bellevue Hospital. They are  also the loves of my life. We moved to a house in Redmond, WA surrounded by massive redwood trees. I spent my days in wooded parks around my house with the children, the PCC market (the best supermarket in the world), or in the kitchen trying out food on my family. It was a peaceful time.

My lovely husband and I in Seattle

Last year, my family had the opportunity to move to Orange County, California. I finally came home after being away for so long. This time, I was ready for suburbia. To my delight, Orange County had become so much more diverse. No longer is dolma that exotic. Asian and Middle Eastern markets have established themselves not too far from my house. I even found lebneh sold at my local Supermarket…..Yeah!  I still really wish there were authentic regional Chinese restaurants near my house.